Your browser is outdated. Please use a modern or updated browser such as Chrome or Firefox. 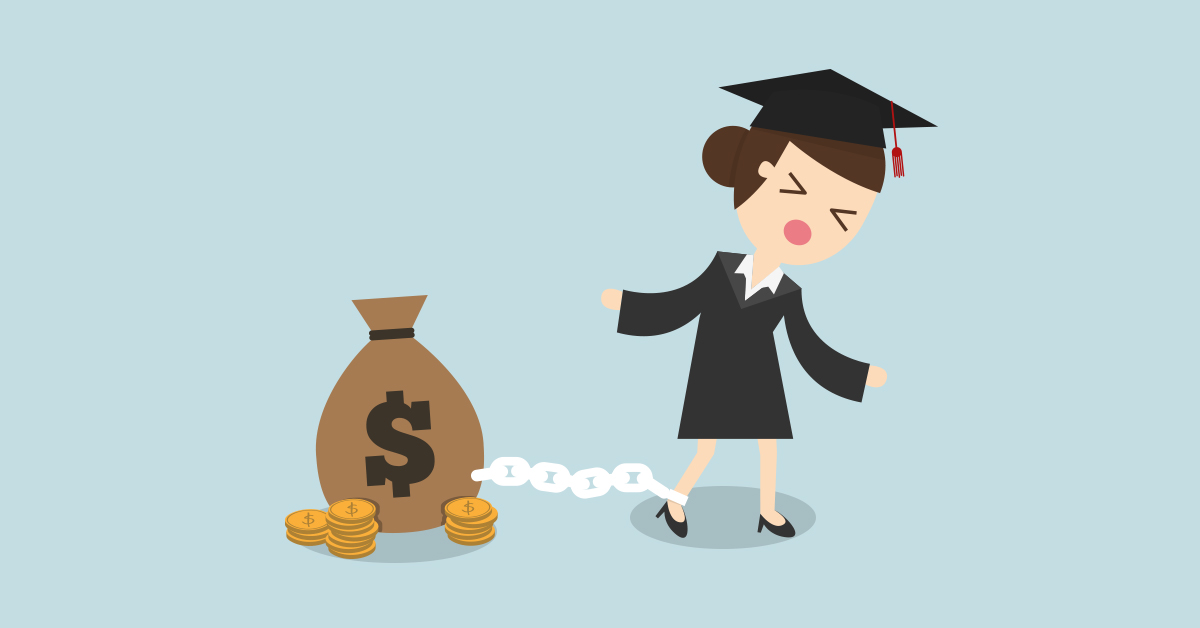 Every time I read a headline mentioning “student loan forgiveness,” I am skeptical. Who wouldn’t want their loans forgiven? But how can the federal government implement such a program when it’s already trillions of dollars in debt?

Then the eternal optimist in me rallies, and I start to get hopeful. Maybe they’ll pick me! There has to be a “lookback period,” right? Loan payoffs made during the recent election cycle will be reimbursed because we’re the ones who were promised relief, correct?

As the year we’d rather forget morphed into 2021, with no real line of demarcation, I kept posing these questions to my husband. I wondered whether the Biden campaign’s promise to erase student loan debt would be honored.

This isn’t just idle curiosity—it’s real for me, as I recently paid off the loans from my husband’s return to college more than two decades ago.This will be the first season since 1997 that we won’t have a significant write-off for student loan interest on our jointly filed tax return.

We also have a 15-year-old daughter who will be entering college during this administration. Will these forgiveness programs apply to student loan debt she accrues?

A Familiar Story for Borrowers

When we first met, my husband was working as a commercial photographer and I was an advertising copy director. In January of 1996, five years into our marriage, a major flood occurred in downtown Pittsburgh and our 1991 Ford Ranger sunk! We were three months away from paying it off, and it was totaled.

When my husband went into work the next morning, he got laid off. His boss told him he had planned to do it the day before but thought the truck incident was enough for one day. What a guy.

We were in the process of restoring a 100-year-old house and were doing most of the work ourselves. So, we collected the insurance money, put it towards the renovation budget, and for the next 15 months, my husband took a deep dive into drywall mud, ceramic tile, and wood refinishing as he plotted his next move.

Commercial digital photography was relatively new, and the equipment was ridiculously expensive. Although he loved being a photographer, he felt the Pittsburgh market was saturated, and he could make a better living if he changed careers. This was both exciting and scary. A lucrative career in IT could bode well for our hopes of starting a family, but it was sobering to think how we would pay for college.

My husband had attended the Art Institute of Pittsburgh in the mid-eighties, earning an associate’s degree in specialized technology. This was before the Art Institutes were accredited. When he applied to the University of Pittsburgh, he was told he would have to complete the full 120 credits; none of his experience nor his Art Institute courses would count toward graduation requirements.

Our goal was to pay for college directly, so we decided to use our personal savings, my annual bonuses, and freelance work that we did together. We fell short and had to apply for a loan after all.

My husband applied, was accepted, and prepared to start school in the spring of 1997. We had not yet purchased a second vehicle, and we lived about 15 miles from Pitt’s main campus, so he needed a way to get there. We bought a used station wagon for $2500 from a dear family friend who worked at a car lot. We couldn’t afford to be picky, and bought the car sight unseen, knowing it had new tires and had recently passed inspection.

As we were driving out to pick it up, my husband said, “I just hope it’s not red.” But you guessed it” the car was Alabama Crimson Tide red, inside and out, including the pleather seats and the thumbtacks that were holding up the red ceiling fabric. It featured a faux wood dashboard and vinyl woody siding, causing my husband’s worst vehicle trim package nightmare to become reality.

He drove that car nearly every day for almost three-and-a-half-years without a single problem. Or one car wash. We even went to a drive-in movie that first summer after purchasing it and invited six friends. We drove.

Even though we were only paying for tuition, fees, books, and supplies, the cost of my husband’s degree was still significant: close to $60,000. Remember, this was in 1997. So, when I heard campaign promises of student loan forgiveness in 2020, I wondered how it could be done in a fair and equitable manner.

Under the Biden administration, proposed student loan forgiveness will apply to federal loan borrowers and not private borrowers, which is how it has always been.

Loan forgiveness and deferral programs have been in place for a long time, and they help students avoid repayment until after graduation and set payment terms according to income. Sometimes they also “forgive” loan balances for those in certain fields such as non-profit or education, after a certain number of years of on-time payments.

So how would a new program under the Biden administration be any different?

The first proposal promises $10,000 of student loan forgiveness to those who don’t qualify for existing loan forgiveness programs AND are currently out of work or were laid off during 2020 due to the coronavirus pandemic.

The second proposal targets student loans for borrowers who attended two- and four-year public colleges and make less than $125,000 annually, although the administration has yet to define which federal student loans will qualify.

As you can see, none of these proposals calls for complete absolution of student debt. Personally, I feel that loan forgiveness is unfair to borrowers who earnestly repaid their debts in full, and to those students (and families) who were forced to take out personal loans or borrow money elsewhere because they didn’t qualify or didn’t have enough in federal loans to cover expenses.

My daughter is a freshman in high school, so we are in the early stages of planning for college. We established a 529 college savings plan when she was born and have been paying into it regularly, although we’ve gotten more aggressive now that 2023—her graduation year—is looming large. She’s leaning toward a career in writing, but not the kind of writing I do. She wants to write novels. She’s proud of the volume of college mail she receives daily and tells her dad and me, “So many colleges want me!”

The pushpins on my daughter’s “College Possibilities” map dot the landscape from New York City to central Florida and points west. My husband has started a spreadsheet, which is what he does to help process and analyze big-ticket purchases. We both realize that formal training typically results in higher income over the long term. However, debt assumption must be weighed against anticipated earnings to determine how much borrowing is right for each student and family.

Financial aid, grants, loans, and “what remains” should be evaluated for both in-state and out-of-state tuition, and for both public and private colleges and universities. This way, you can determine if a specific program is even feasible should your student be accepted. You can’t enter college hoping that your debt will be forgiven once that diploma is hanging on the wall. It’s too risky.

These unknowns are the reasons I sought expertise from someone immersed in the “how to” of paying for college. I discovered a blog, Taming the High Costs of College, and have been working with its founder, Brad Baldridge, a Certified Financial Planner® and expert in college funding.

During our first conversation, Brad said, ‘You don’t know what you don’t know,” and I wholeheartedly agreed. Brad has experience with numerous payment approaches and is helping me decide what is right for my family. There is no “one size fits all” solution when it comes to paying for college, and although federal loans are attractive, there are other ways to fund higher education.

To find out more about these options, read Brad’s 6 Ways to Pay for College and then listen to his interview on Financial Mentor to learn how to graduate from college debt-free. If paying for college is in the not-too-distant future, the time to start planning is now, before the floodgates of student loan debt open and you end up caught without a bailer.

Hi, I’m Brad Baldridge, a college funding specialist and the owner of Taming the High Cost of
College.

If you’d like to get great tips and advice on how to save more money for college, reduce your costs, and put your student on the road to a bright future, subscribe to my free e-newsletter.

You can also check out some of my useful college planning articles and resources below.